Before the El Camino or the Apache Fleetside Pickup, There Was the Cameo Carrier - Aldan American
FREE SHIPPING

Before the El Camino or the Apache Fleetside Pickup, There Was the Cameo Carrier 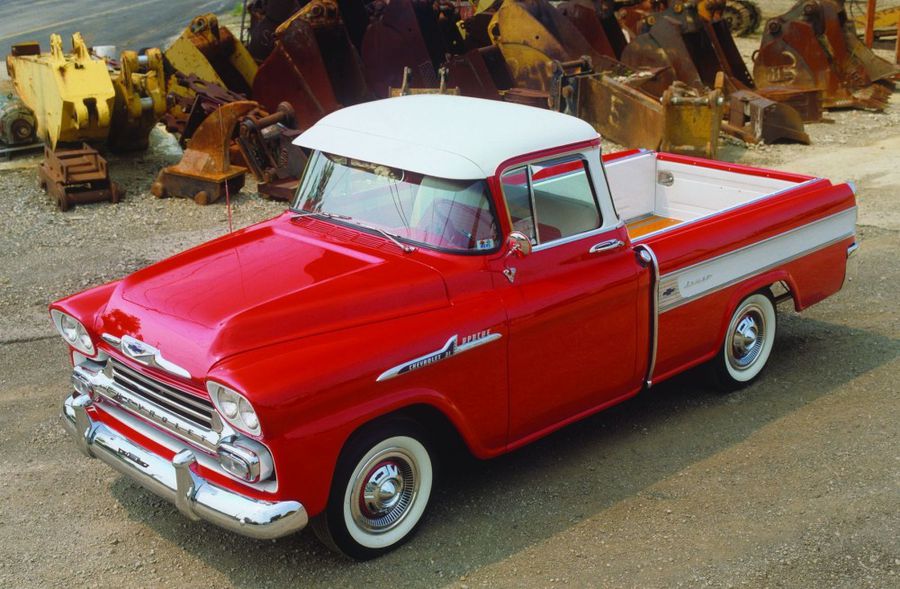 In March 1955, Chevrolet launched an entirely new series of trucks and pickups—they were advertised as “Task Force” trucks—and Chevy was determined to give the public vehicles for whatever tasks they had. So, they rolled out an innovative Task Force pickup to catch the eye of new and more buyers: the Cameo Carrier.

With the Task Force trucks, Chevy was rolling out something that drove better, felt better and looked better than ever. The trucks were lower in overall height, had shorter wheelbases and had better stability. The front suspension was boosted by wider springs and I-beams that were longer and softer—the rear springs were redesigned and optimized for a better-quality ride.

There were stylistic changes too. The bulky big-truck look was replaced by a redesigned hood and body that made it look as if these trucks were leaning forward, powerfully.

The trucks came with either a powerful V-8 engine or an inline six. Hooded headlights, an eggcrate grille design picked up from passenger cars and an overall restyling running front to back completed the look. Here’s how Chevy described it in their promotional materials:

“Completely new cab, single-unit bodies and sheetmetal structures combine an ultra-modern appearance with many advantages in driver convenience and comfort.”

Here’s the original 1955 Chevy Truck Engineering Achievements Report, outlining all the models in 1955:

The Cameo Carrier pickup was one of them.

All pickup. All amazing.

This wasn’t a pickup bed on a car chassis, a “ute” as Australians called that type of car. And it wasn’t necessarily the father of the El Camino, certainly that was a few years from being born. But the novel concept would pave the way for trucks that were more luxury and form than function, models like the El Camino.

Officially, the Cameo Carrier was Model 3124, a reimagined pickup with power, style and function—the good-looking cousin of the other Chevy Task Force trucks that came out that year, and up to 1958.

One reference to it said, “It was part pickup and part Corvette.”

· Fiberglass rear-body panels, from the same supplier as the Corvette

· Straight, streamlined side panels that covered the rear wheel-well bulges

· A “character line” that ran the length of the pickup, from the headlight to the taillight

By far, the sleek, flat side panels were the biggest distinguishing feature of this evolutionary pickup truck. The bulging wheel wells were gone. But that’s not the only reason this wasn’t your granddaddy’s pickup: The taillights, hubcaps, whitewall tires and bumper were styled after, or borrowed from, the Chevy Bel Air.

The Cameo Carrier was stylish on the inside too. Exciting inside features of the new Cameo:

In its first year, the Cameo Carrier was available only in Bombay Ivory with an “Industrial Red” accent color. More color options came out in ’56.

The brain behind the Cameo’s design came from Chuck Jordan, who won the General Motors Fisher Body Craftsman’s Guild model-building contest—at the age of 19. As part of the honor, Jordan earned a trip to Detroit and the GM Design Studios. He studied mechanical engineering at Massachusetts Institute of Technology (MIT) and also attended (when he could) Chouinard Institute of Art in Los Angeles to learn design.

After graduation, he joined the GM Design Studio and the truck design studio in 1949. Eventually, he helped to create the look for the Task Force trucks and in 1954 sketched out the design of the Cameo Carrier. Jordan would eventually become the fourth VP of GM Design.

Brawn and beauty, but at a cost.

The 1955 Cameo Carrier was the first stylish pickup Detroit had ever rolled out. It cost around $1,950, nearly $500 more than the standard half-ton short bed in 1955. Chevy sold 10,000 Cameos the first year. Sales declined as other car brands introduced pickups loaded with options. Production of the Cameo ran through 1958.

The Cameo Carrier is popular with collectors. A restored Cameo or one with low miles is attractive to those who want a piece of true Chevrolet, pickup and design history. Prices can start at $60,000 and go up from there.

BE THE FIRST TO KNOW ABOUT DEALS, SALES & NEW PRODUCT RELEASES

We use cookies on our website to give you the most relevant experience by remembering your preferences and repeat visits. By clicking “Accept”, you consent to the use of ALL the cookies.
Do not sell my personal information.
Cookie SettingsAccept
Manage consent

This website uses cookies to improve your experience while you navigate through the website. Out of these, the cookies that are categorized as necessary are stored on your browser as they are essential for the working of basic functionalities of the website. We also use third-party cookies that help us analyze and understand how you use this website. These cookies will be stored in your browser only with your consent. You also have the option to opt-out of these cookies. But opting out of some of these cookies may affect your browsing experience.
Necessary Always Enabled
Necessary cookies are absolutely essential for the website to function properly. These cookies ensure basic functionalities and security features of the website, anonymously.
Functional
Functional cookies help to perform certain functionalities like sharing the content of the website on social media platforms, collect feedbacks, and other third-party features.
Performance
Performance cookies are used to understand and analyze the key performance indexes of the website which helps in delivering a better user experience for the visitors.
Analytics
Analytical cookies are used to understand how visitors interact with the website. These cookies help provide information on metrics the number of visitors, bounce rate, traffic source, etc.
Advertisement
Advertisement cookies are used to provide visitors with relevant ads and marketing campaigns. These cookies track visitors across websites and collect information to provide customized ads.
Others
Other uncategorized cookies are those that are being analyzed and have not been classified into a category as yet.
SAVE & ACCEPT
View Cart Checkout Continue Shopping